Do young people know the risks of unauthorized migration? - E.S.

Migration is nowadays more and more in the headlines, with all those stories reflecting the drama of people on the move, pushed by so many motives and pulled by the prospects of a better future elsewhere (Laurence Hart- IOM Afghanistan Newsletter, spring, and summer- 2016). 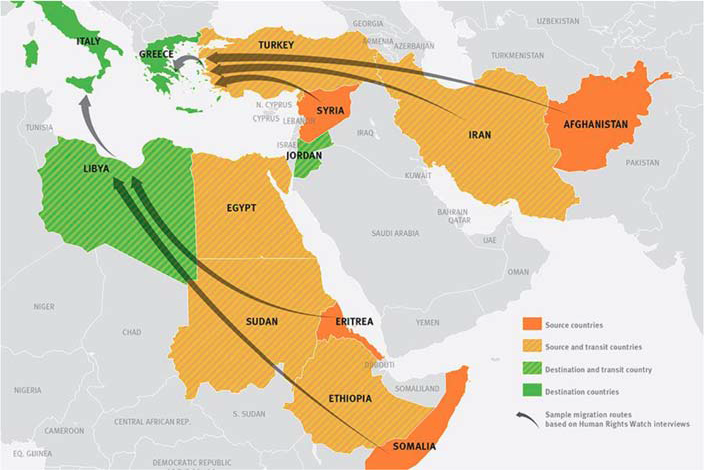 Today refugee movements no longer characterize the primary source of Afghan migration, (Afghanistan Migration Profile – 2013). Migration in search of livelihoods is currently the primary reason for migration, and this occurs through rural-urban migration in Afghanistan or circular migration patterns as Afghans cross into Pakistan and/or the Islamic Republic of Iran. Afghans utilize their social networks to find countries. Afghans are also starting to migrate more to European countries, Australia and Singapore.

2015 turned out to be the year in which mass flows of migrants from Syria, Iraq, and Afghanistan moved towards European countries. Afghan nationals (250,000 people) were ranked to be the second largest migrant population after Syrians, arrived in Europe during 2015 (IOM’s Displacement Tracking Matrix TDM – 2016).

According to IOM’s DTM (Data Tracking Matrix -2016) the number of arrivals by sea and land to Europe in 2015 exceeded one million on the 20th December, with the total number registered by the relevant national authorities standing at 1,046,599 according to IOM’s DTM1 system in coordination with relevant IOM missions and national authority partners. Of these, 20.2% were Afghans while 2.7% were Pakistanis. In data from January to the end of May 2016, the cumulative total of 220,796 arrivals includes 19.5% Afghans and 3% Pakistanis.

Irregular out-migration flows of Afghans not only raised concerns of European countries but also the government of Afghanistan’s as the issue of Brain Drain devastatingly impacts country’s economy after all these years of international support to Afghanistan since the fall of Taliban regime in 2011 (Cases of migrants abuse en-route by networks of people smugglers, forced harassments and violation to the migrants’ human rights on one hand and fatal journeys through the Mediterranean sea, on the other hand, calming lives of migrants, children and women, in particular, further raising their vulnerabilities, requires comprehensive information dissemination campaigns to educate people about potential risks of irregular migration and think twice before they choose any such fatal journeys (IOM Afghanistan’s desk review on out-migration response – 2016).

There are many risks involved in irregular migration; risks not necessarily fully understood by those deciding to leave. Irregular migrants may encounter severe complications on their way as they travel in circumstances. These risks include dangers to the migrants own lives and well-being, safety and security and vulnerability to being trafficked for sexual and labor exploitations. Therefore, it is necessary to sensitize prospective migrants’ understanding of what could happen to them if they chose to leave irregularly for example, through the use of a smuggling network.

Families would often have paid considerable sums of money to traffickers and people smugglers to arrange their child´s journey to foreign countries and will expect that money to be repaid once the family member has become established. Many sell everything they own to pay smugglers risking to lose all their investment without any guarantee of success. The irregular migrants put their lives on the line; the routes and middlemen used may be unreliable and dangerous and leave many injured, abused and even killed.

Approach and methodology used to address the problem

Access to accurate statistics on irregular out-migration flows from Afghanistan is almost impossible due to the open borders with the neighboring countries Iran and Pakistan in particular (Interview with Afghan Minister of Refugees and Repatriation (MoRR) – June 2016). Therefore; given the situation project work required administering a semi-structured survey through a designed questionnaire followed by a focus group discussion.

At the meantime, reference to the secondary data was a must to get a sense on how to measure and contrast the data collection requirements to address the phenomenon by proposing to the policy makers the cost-effective way of persuading people not leave the country without prior information by which they could decide to leave.

After the raw data was collected, at the consolidation level a thorough clearing of the collected data has taken place, and further analysis have been illustrated for the sake of providing information and feed them to policy-making level institutions in need of such data.

Field visits were also conducted for the objective of the subject matter, not only to have gathered valuable data both from urban settings and rural areas to have maximized the credibility of the collected data/information.

For the data collection, two formats were used that are available in the appendix for further reference, both tools were proved to play remarkable roles in gathering and generating information that would have never existed in its nature in Afghanistan.

While there is a real shortage of data on the number of Afghans (regular, irregular, registered refugee and unregistered refugee) in neighboring countries, or of the size of current outflows from Afghanistan.

For decades, Afghanistan was known to be the world’s largest place of origin for migrants and refugees. Today the country is experiencing mixed migration flows, with the emigration of asylum seekers and refugees, economic migrants, unprecedented internal movements and displacement, and both voluntary and forced returns of Afghans who had – and continue to seek – safety and human security abroad, which makes it very difficult to understand the phenomenon.

The scale of mixed flows has consequences for the country’s development and governance. While migration holds the promise of a positive force for the country’s development, to date, no nationwide data is available to know how to tap into migration as a force for Afghanistan and its region. Beyond analyses of migration, poverty, stability, and fragility, which have marked research in this context for over 20 years.

A nationwide effort is required to bring out the positive aspects of migration and mobility as a force for Afghanistan’s development providing a set of migration indicators and standard migration data that is currently unavailable, feeding it into Government efforts and policy planning on migration.

The Government, International Organizations, and NGOs, donors, and academics have identified clear data gaps on Afghan migration. Migration data is one of the areas with the largest data needs currently not met due to open borders with neighboring countries, and lack of accurate land and air migration flows tracking mechanisms.

There is an argument to be made in the Government’s responsibility to ensure independence and reliability of data that it is basing its policies on. They face the constant risk that their work will be manipulated by political actors and therefore; this outlines the importance of an independent work to lay out a baseline.

Data is needed to reinforce state policies in a neutral and objective manner. While the need for the government capacity building and strengthening their data collection capabilities is an area of focus as well. It is also important to highlight that migration is a dynamic phenomenon, with overlapping migration experiences and drivers, as well as multiple reasons why migration is relied upon as a coping strategy.

One large and broader nationwide survey like the NRVA/ALCS is not adapted to informing migration policies and will at best provide only a limited understanding of migration and mobility in the Afghan context. This thesis is aimed at drawing a baseline through a small scale sample for which a survey was administered followed by a focused group discussion only the in the provinces of high return in Afghanistan for returning migrants from EU countries during 2015 and until June 2016.

If you want to learn more from this executive summary, send us an email to mashlm@usi.ch requesting the full thesis.